Ghosts have fascinated me all of my life, and while I've never completely believed in them nor I have I ever seen one, the idea of them still intrigues me to no end. The idea of a person's spirit lingering around the living after their death can be both frightening or hopeful, yet always interesting. When it comes to films about ghosts, I have always preferred it when, as Edith states in this film, ghosts are used as a "metaphor for the past", rather than just used as a gimmick for a cheap scare. One of the reasons that 'The Shining' is so effective is that the apparitions convey the gruesome history of the Overlook Hotel, 'The Haunting' is so effective because it uses the ghosts to establish the events that made Hill House the way it is. With 'Crimson Peak', Director Guillermo del Toro attempts to utilise this use of poltergeists in this sense to illustrate the past of Allderdale Hill, and this is where 'Crimson Peak' thrives the most, when it becomes apparent to us that it is "not a ghost story, it's a story with ghosts."

Whether you're a fan of Del Toro's work or not, it's hard to deny that he is currently one of cinema's most unique minds. Between his elaborate set pieces, compelling visuals & unorthodox modern day fables, Del Toro has established a cult following for himself that has seen his loyal fans follow him from film to film. If you are one of those Del Toro fans or just loved 'Pan's Labyrinth', I believe 'Crimson Peak' will appeal to you. It has a similar sense of visual flair, intense thrills and bloody violence. For those unfamiliar with Del Toro or 'Pan's Labyrinth', I still believe 'Crimson Peak' is worth a watch if you're looking for a fun horror/thriller.

The main criticisms I have with the film is, ironically, the opposite of the criticisms which Edith's (Mia Wasikowska) manuscripts receives from her publisher, who informs her that her story about ghosts is in need of a (tacked on) romance. I believe the opposite in the case of 'Crimson Peak'. I never really appreciated the romantic aspect to the film and it's not at the fault of the actors, Wasikowska & Tom Hiddleston, they have decent enough chemistry, and I know this is a gothic romance and their partnership was the driving force of the story, but it still felt a little tacked on. It almost felt like Del Toro was in Edith's position and the studio made him write a love story into his horror film.

For the positives though, 'Crimson Peak' builds tensions pretty excellently, from a really gripping opening scene to an equally gripping final scene. While the pacing slows down at points, it never really hinders the overall film. The film is visually stunning and the set design is exceptional. Allderdale Hall is a beautifully haunting set, the walls dripping with the red, blood-like clay, a dilapidated roof which sees leaves fall through the house in the spring and snow in the winter. The visual effects are pretty solid, with the ghostly apparitions appearing bloody and ghastly.

Del Toro is very evidently a student of the game, so to speak, and his inspirations are evident all throughout the film. Del Toro pays homage to the German expressionism films of the 1920's, such as 'Nosferatu' & 'The Cabinet of Dr. Caligari', with its use of gothic set pieces, shadows and the iris out to transition between scenes. As well as the horror films of Mario Bava, with the use of spellbinding colours, and a few little visual nods to Kubrick's 'The Shining' spread throughout.

Mia Wasikowska is an actress who seems to keep getting better and better with each passing film. It took me a while to get completely sold on her but I think she's excellent now. She's got all the capabilities to carry a major film and this is a fine example. Weather she's evil, good, creepy, cute or crazy, she has really set herself up for a wide range of roles. In this film, she is the intelligent, good-hearted, yet naive rich girl who has to mature in front of our in eyes in order to survive the events of the film. It's another good performance in what is becoming a really solid filmography.

Tom Hiddleston exudes a brooding charm and does very well in his role. The performance which is likely to get the most love though, and rightfully so, is Jessica Chastain, who even out-creepy's the ghosts. She is so easily able to convey a threatening, menacing vibe and when she goes full-crazy, it's a thing of terrifying beauty.

Horror is the film genre closest to my heart, while it is currently a heavily saturated genre that is polluted with hundreds upon thousands of forgettable or poor films on a yearly basis, there is usually very few horror films that see a wide release (at least where I live), usually the best horror films, like 'The Babadook' & 'It Follows' are reserved for small independent cinemas, while the 'Saw's & 'Paranormal Activity hit the major theatres. So when a film like 'Crimson Peak' arrives with a wide realease and hype to boot, it's a very exciting occasion. While I wouldn't put this film on the top-tier of the best horror films in recent years, I do think it's a good enough film to regenerate some buzz in the genre, especially during this time of year. Del Toro is very clearly a huge fan of this genre and his passion pours through in every frame.

'Crimson Peak' is a wildly entertaining cinematic experience. An excellent cast, eerie atmosphere and quality scares highlight is rare in that it's a satisfying big budget horror film. 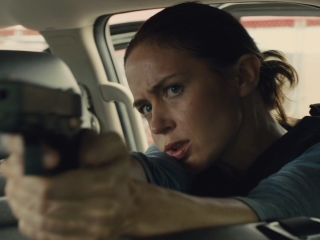 "You ask how the watch is made. Keep your eye on the time."

A quiet street sits idle and in the distance a woman is seen walking a dog. It's a moment of serenity and stillness, which is notable because it's one of the very few that the next two hours will have. Suddenly that serenity is gone, as fully armed FBI swat team members move in from the left of frame and our perspective of what seemed like an innocent street has changed as we now suspect something malevolent is at play. And thus begins a prevalent and reoccurring theme of 'Sicario', that of malevolence lurking under innocence, and things not being always as they seem.

We are then introduced to Kate Macer, played by Emily Blunt, an FBI agent with good intentions but a lack of understanding of how the system works. She is brought into a team that is out to rid of drug cartel on the U.S & Mexican borders by eliminating an anonymous drug lord. What makes Kate a compelling character is that she isn't a badass who is going to single handedly take out all the villains. No, she's  vulnerable and anxious yet brave and determined, she will pull the trigger and take out an enemy when need be but prefers a less a fatal form of justice. The film is telling a gritty and realistic so it's great to have a central character that feels genuine and human and not a action-heroine who can fix the drug problem with a solitary bullet.

From the get-go, 'Sicario' grabs a hold of you and refuses to let go. It's so relentless that even the down points and dialogue heavy scenes have an uneasy aura that keeps you on your guard.

The film is flawlessly shot, which should come as no surprise seeing as it's filmed by the best DOP alive, and probably the best ever, Roger Deakins. I'm one of those people who could just swoon over the man's abilities and body of work, and complain about his lack of Academy Awards, for hours on end, and 'Sicario' is yet another example of why the man is so well respected. Absolutely stunning photography that complements the tension is building in absolutely perfect fashion. Those mesmerising copter shots give the desert a life of it's own. Jóhann Jóhannsson's score is fantastic too, every time it kicked in, the tension rose and you were kept on your toes.

I'm very fond of Emily Blunt, I think she's an excellent actor with very broad range. Her performance in this film may be my favorites of hers thus far. As I alluded too above, her performance is multi layered, which allows her to portray vulnerability, fear and bravery. She's fantastic. I always love to see Josh Brolin and he's in his absolute element in this film, providing some much needed comedic relief at times and always being witty and entertaining.

As good as the cast is all across the board, the film really belongs to one man, and that is Benicio Del Toro. I've been a huge fan of Del Toro's for many years now, I think he's a phenomenally talented performer, but I've noticed that he's taking roles in more commercial or ensemble films in recent years, while he's always good, he never really gets the chance to shine like he did earlier in his career, that isn't the case with 'Sicario'. From the moment Del Toro's character, Alejandro, enters the frame, he completely commands the screen and makes the film his own. Alejandro is a hazy character, in that for most of the film, we are certain where his allegiances truly lie or what his motives are, and that just makes him even more commanding when he's on screen. He has moments where he is a helpful and compassionate and other times he is absolutely ruthless and terrifying. There is no way he doesn't get an Oscar nom for best supporting actor.

Once again Denis Villeneuve has delivered an impeccably crafted, tenaciously paced, gritty thriller that continues his sublime form. He is quickly becoming one of my favorite filmmakers and 'Sicaro' rivals 'Enemy' as my favorite of his filmography. I absolutely loved this film, it was a truly unique and exhilarating cinematic experience that had me on the edge of my seat for practically the entire duration. 'Sicario' will surely go down as one of my favorite films of 2015.