Birdman: or (The Unexpeceted Virtue of Ignorance) (2014) 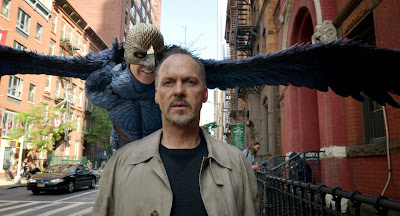 "You're doing this because you're scared to death, like the rest of us, that you don't matter. And you know what? You're right. You don't. It's not important. You're not important. Get used to it."

Blurring the line between fact and fiction

Dozens of film do it yearly, but few blur that line more, or do so in such spellbinding fashion, than Alejandro González Iñárritu does with 'Birdman (or The Unexpected Virtue of Ignorance)'.

While it would be more than unfair discredit Michael Keaton's work post 1992, he is most widely recognized as playing the caped crusader in both of Tim Burton's 'Batman' films. In this film, Keaton plays a character named Riggan Thompson, an actor most widely recognized for playing a superhero named 'Birdman', now he is adapting a stage play in a desperate attempt at one more shot at acceptance. The casting of Keaton is just so ideal and gives the film a sense of surrealism right out of the gate.

As incredible as the film is in so many areas, it would ultimately fall short of greatness if the lead performance was anything less than stellar, fortunately Keaton goes above and beyond the call of duty, turning one of the most mesmerizing and layered performances in recent memory. Keaton is able to convey a character so haunted by regret, desperation and yearning for one more chance to prove that he matters.

The supporting cast is outstanding too, with everyone doing the part to add to the overall experience as well as compliment Keaton's character and performance. Edward Norton is absolutely outstanding as the disillusioned and insensitive yet endearing and hilarious, Mike Shiner. Emma Stone is also fantastic and give, in my opinion, her finest performance yet as Rig's daughter, Sam.

It would be impossible to fully sing the film's praises without mentioning Emmanuel Lubezki's Cinematography. It is some of the most pulsating and riveting camera work in recent memory, as Lubezki manages to make the film feel as if it is taking place all within a single take, to compliment the play that was taking place in the film. It's truly an incredible feat from one of the absolute finest cinematographers working today.

Iñárritu has crafted a truly unique, spell binding and profoundly effecting piece of work that is deserving of all the praise it is receiving.

"A thing is a thing, not what is said of that thing"