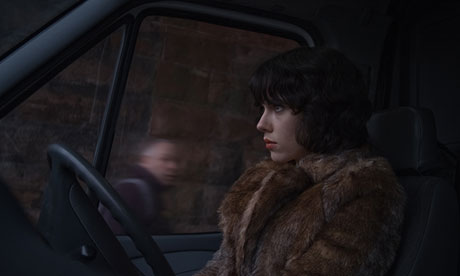 There are thousands of motion pictures released on a yearly basis, some make a huge impact, make millions and millions of dollars or they will garner unanimous critical acclaim, others will flop at the box office and mercilessly mauled by critics, Jonathan Glazer's 'Under the Skin' will fit into neither of these categories. This film won't make a lot of money, hell it's only playing in 1 cinema in Melbourne, it also won't receive unanimous critical acclaim, but if you like 'Under the Skin', then it will be a film that stays with you forever.

An alien disguised as a beautiful woman, travels through Scotland preying on isolated men.

I've heard several people liken 'Under the Skin' to the work of Stanley Kubrick, I have to echo these statements. Like a Kubrick film, this renders you speechless, show don't tell approach, visually awe inspiring and something that changes the game. While emulating a classic film director's style can be a dangerous game, but Glazer does it to perfection, it's inspiration not plagiarism. 'Under the Skin' may be the closest thing to a Kubrick film since 1999.

This is most definitely a film that is ripe for interpretation, another Kubrickian trait, it's very dense in symbolism and no two people may come out of the cinema with the same deeper meaning. In my opinion, 'Under the Skin' is about the hostile relationship between genders. Johansson's central character, a beautiful woman, is praying on the men of Scotland for morbid reasons, yet said men are praying on her for sexual reasons, yet both sexes are depicted as equally predatory.

The Visuals in this film are some of the most beautiful I've seen in a long time. The Cinematography, Art Direction and Production Design are just of such an incredible high caliber. There were so many moments that just absolutely blew me away, the first ''seduction'' scene (I guess I should call it) left me in absolute awe, the execution of those scenes are just pure genius and a reminder that it's what we don't see that disturbs us the most. The film also boasts an excellent score by Mica Levi, absolutely mesmerizing and hypnotic, especially in the aforementioned ''seduction'' scene.

I've always liked Scarlet Johansson, a truly beautiful woman who has always been very likable and good performer, but in my opinion, she is no longer a ''good performer'' but instead a ''great performer''. Between 'Her' and 'Under the Skin' Johansson has become one of the premiere actresses in Hollywood. Her performance in this film is absolutely sublime. While in 'Her', she was incredible with only her voice, here she is incredible with only minimal dialogue.  Everything Johansson does in this film has deeper meaning, she turns this no named, blank slate of a character into an immensely fleshed out and multi dimensional character. This woman is truly a goddess in every way. It was also a wonderful move for Glazer to use actual unsuspecting civilians  to play the folks that are lured into the car, and Miss Johansson plays with it exceptionally.

I had the highest possible expectations for this film, and it completely obliterated them, it's more incredible than I could possibly hope for.  Scarlet Johansson excels in a performance that dances with perfection, Jonathan Glazer's craftmanship is phenomenal. I am so glad I traveled to see this film and I highly anticipate seeing it again. I predict that 'Under the Skin' will one day go down as one of my all time favorite films.