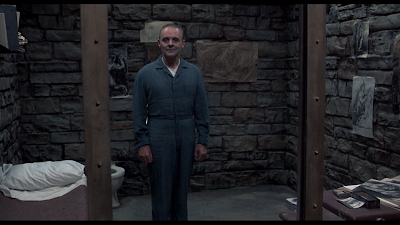 “Is it true what they’re saying... he’s some kind of vampire?”
“They don’t have a name for what he is”


I have watched this film 2 times in the last 24 hours. It’s a deeply complex, multi layered film that inspired, frightened and disturbed film makers and watchers for the last 20 plus years. Every time you mention the word ‘thriller” or “drama” when referring to movies, this film is bound to come up in the conversation. Its won multiple accolades include placing 65th on the AFI best film, 25th on the IMDb top 250 films list and has received a lazy 5 Oscars. Yet does this film deserve this kind of reception... After all, it’s just another crime film about the new FBI agent on her first assignment. It’s just another film about a sophisticated psychopath, and it’s just another murder mystery. So why so much praise?
Sometime during the late 1980’s, a young, female FBI cadet is sent to integrate a homicidal cannibal to help identify the possible motives behind the lose lady killer ‘Buffalo Bill’. That homicidal cannibal is Dr Hannibal Lector. The film explores the obsessive, yet frightening and intense exchanges between these characters after the disappearance of yet another girl.


To answer the question before, this film has received the kind of praise and accolades it has because the film is a masterpiece. Every single detail of this film has been thoroughly thought through and expertly delivered. This film manages to deal with numerous different themes and issues, as well as the detailed issues of various complex and unrelated characters. And the manner in which this film is presented is also incredible. It seems as if ever 5 minutes you are learning more and more about Dr Lector, or Clarice Starling (the rooky FBI cadet). The film itself also develops in such a weird and wonderful way, making every moment of the 118 minutes of running time intense, spooky and excitingly awesome.


As I just said, director Jonathan Demme has executed this film in such a sophisticated and excellent way. The film looks great. The use of minimal lighting, extreme close up and the slow moving, long running camera shots and angles creates an atmosphere of suspense, tension, frustration and makes everything, and everyone,feel uncomfortably close to you as a viewer. It’s awesome! The layout of this film is set up in such a way that we are consistently making realizations about things just before characters are. This style of film making makes it very engaging and whilst being very deep with lots of overlapping of themes and characters, the film is relatively easy to follow.


Acting and character development in this film is unmatched. I’ve watched a lot of films but I personally have to say that this film is the standard of excellence. Every single character, from Agent Starling to the frightened, nameless cop in the elevator, is acted and developed so, so well. This is by far the best acting performances of every single actor in this film. Jodie Foster as Clarice is amazing. The character is blunt, to-the-point and very professional yet Fosters adaptation of her lets us see all of her fears and demons that she still battles with. Her acting is incredible. All other actors however are marvellous too. Scott Glenn give’s his very serious character a caring likeability. Anthony Heald delivers a very good interpretation of a seemingly strong, but internally scared, and selfish jerk-of-a asylum head doctor. Dinane Baker is strong and relatable, Brooke Smith is very believable and Ted Levine as “Buffalo Bill” is sensational.


However, it’s no secret that Hopkins practically IS Silence of the Lambs. His performance alone is the defiant highlight of the film. His acting is so good because he essentially shows no signs of empathy or any real sense of humanity, yet is so rational and so very right! Hopkins aw-inspiring acting also gives the audience, and the characters, a feeling that he is never completely “there” when onscreen, but a part of him is still present when he is not in the scene. His character is so scary and so precise that he doesn’t just fit a stereotype, he creates one. Every single on screen psychopath since 1991 will forever live in the shadows of the now legendary Hannibal Lector.


Silence of the Lambs defiantly deserves everything it has, and more. It’s sensational, engaging, sad, scary and manages to be both unrealistic and realistic at the same time. I really, really like this film and I will never question its integrity ever again. This is a must watch for everyone.