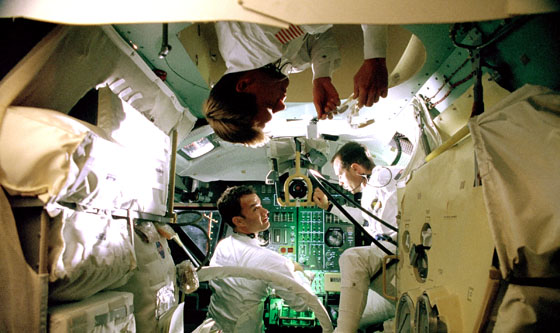 Gentlemen, what are your intentions... I'd like to go home

Apollo 13 may not be the definitive space movie, but it certainty has been deemed an accurate portrayal of the experience of space travel and the consequences of mission failure. Whilst this film does entail a quintessential Hollywood-esk, I personally found it an entreating film about the real life events of the Apollo 13 mission to the moon.

After the success of the first ever moon landing conducted by Neil Armstrong in 1969, NASA decide to send a new crew to the moon on a mission coined as “routine” by the media and American public. After the loss of Ken Mattingly (Gary Sinise) as the ships pilot and the induction of Jack Swigert (Kevin Bacon) the crew is blasted off into space only to find that there spacecraft is to undergo massive mechanical faults, threatening the mission and the lives of the astronauts inside.

This is an impressive looking film and had many good elements to it. However it lacks any standout performances and doesn't feel as good to watch as some other Ron Howard films such as Beautiful Mind. And, whilst it does convey the fears and stresses of and between characters, it isn't very exciting. I also two think that almost the entire first half of this film is unnecessary and kinda boring. Also too, some characters and scenes feel totally irrelevant to the storey and can be painful at times, such as the inclusion of Jim Lovell's mother. Furthermore, I did not like the manner in which some characters were introduced into the film.

The majority of this film is short in two primary locations, at the Houston command centre, and aboard the Apollo 13 spaceship. Appropriate filming techniques have been employed by Ron Howard and Dean Cundey (the director of photography) accurately displays the feeling of being suspended in space through the use of shaky camera and moving long shorts. Similarly, the atmosphere of tension in Houston is created by short, fast moving shots of people and computer screens and the extreme close ups of central characters including those played by Gary Sinise and Ed Harris. The decision to present two different styles of filming to demonstrate the two different environments is a clever move and one that is to be congratulated, Howard has produce a fine looking film by employing these contrasting techniques.

As mentioned earlier, the actors of this film have been well casted and give good portrayals of the characters, but the film lacks the excellent acting that we would expect from some of the actors. Tom Hanks gives what I would honestly say a reserved performance and is not given the opportunity to shine as he does in some of his other films. He does however play a good role as Jim Lovell and the audience is invited to empathise with his desires, despite the fact that it sometimes felt like he was just reading a script. Kevin Bacon as always presents himself as a slightly edgy character and has a youthfulness which provides an extra dose of tension inside the spacecraft during times of failure and realization which does make scenes all the more traumatic, in a good way. His character however, doesn't seem to carry any realism and his connection to the story feels rushed... Plus he tells a lot of bad jokes.

It would be safe to say that if there was a “standout” performance in this film it would be Ed Harris as Gene Kranz. He brings a certainty element of calm to this character whilst still being able to express a sense of stress and serious concern. He is indeed a talented actor to is indeed give the chance to show at least some of his skills in the film. Gary Sinise and Bill Paxton also act well in the film but I was however unimpressed with Kathleen Quinlan throughout the movie. To me she just seemed week and almost an unnecessary character.

I think that this film will indeed be remembered. It's no Space Odyssey and I doubt it'll ever be a classic but it is certainly a good film that was enjoyable to watch. Ron Howard is not a superstar director but he has created an accurate re-enactment of a pivotal time in American space travel history and whilst there are elements of this I don't like, I think he has done well.

I was honestly a little cautious when I first heard about '12 Years a Slave', while I had no doubt that it would be a good film, if not a great one, I just questioned Steve McQueen's for releasing a film about slavery at this point in time in human history. While there is a sad reality that racism is still prevalent in our society, I would definitely say that it is at an all time low, I mean there is an African American president of the United States for crying out loud! While I am very aware that McQueen is a gifted filmmaker, I could have seen him using an adaption of Soloman Northup's novel as a vehicle for cynical revenge  by way of Cinema that would create mass controversy. Luckily I was dead wrong, '12 Years a Slave' is not a cynical hate filled film, it is instead an emotional, powerful triumph of a film that portrays a dark time in human history, the power of resilience and dignity and the ever lasting pursuit for freedom.

Solomon Northup is a free man whom is abducted and sold into slavery. Thus begins a decade long odyssey of abuse and punishment, all the while never giving hope of seeing his family again.

Steve McQueen really is a remarkable fimmaker, he is fearless and will never resist staring into the darkness to get the results, he is obviously very passionate about this source material and portrays the events with a heart and dignity, never skimping on the monstrosities yet never really spreading blame. McQueen is simply focused on giving a realistic portrayal of a time where humanity was selective. It is most definitely a realistic feeling picture, there really is not a caricature to be found on screen, Screenwriter John Ridley's adaption of Northup's novel is a marvel, his dialogue is profound and relentless and even the smallest characters feel incredibly human. Another aspect of this film feeling so authentic is the incredible set design and costumes. This film truly feels like a product of a different time, immaculately detailed and throughout sets that make you feel like you have traveled through time. DP Sean Bobbitt's Cinematography is remarkable and further drives home the fact that there is beauty beneath the darkness

The themes of survival, dignity and slavery are all handled perfectly and with the utmost dedication. Solomon Northup's plight is one that we can all learn something from, many of us will never experience the hardships he did but many of us will need to utilize the same mindset he did, that of courage and determination. Northup is portrayed as a man who is encouraged to keep his intelligence and talents hidden, in fear of death, he is forced to become a slave yet he refuses to lose his dignity, no matter what obstacles come his way. Soloman, or Platts as he is referred to, is an incredible character that transfers brilliantly to film.

I took note of the various biblical reference throughout the film, and it seems like McQueen is making a statement about God being futile in slavery times and possibly overall. I felt like McQueen was saying that God is not responsible for negatives in life, nor is he responsible for the positives, it's people who are fully responsible for their actions, whether they lead to hardships or not. I found this to be a really powerful message and it made me wonder whether or not McQueen was an Atheist or not, can't find any evidence however.

The star studded cast oozes talent. Chiwetel Ejiofor is absolutely sublime in the lead role, his facial expressions, line delivery and strong will make this performance absolutely unforgettable. I can't say enough good things about Ejiofor, I've yet to see Joaquin Phoenix's performance in 'Her' but at this point I think Ejiofor deserves the Oscar, truly amazing! The supporting cast is an absolute dream too, I always love it when there is an Actor I genuinely like as a human being who can play a villain so detestable that you absolutely hate him/her, this is what Michael Fassbender does in this film. His character of Edwin Epps is a despicable monster of a man, a lunatic who has position of power and Fassbender plays him with rare type of unpredictability and edginess, a crazy good showing! Another marvel in the cast is Lupita Nyong'o, Incredible performance! She is playing such a difficult role and she plays it too absolute perfection, not only is she deserving of an Oscar nomination, she should win the damn thing! Benedict Cumberbatch excels as William Ford, a character that represents repressed humanity, he has remorse and heart in a time where those things were forbidden. Paul Dano is great as John Tibeats, a character that represents the opposite of Cumberbatch's, one who represents the clear inhumanity and cruelty of the time. Paul Giamatti pops up and is as great as usual, playing a remorseless bastard. Brad Pitt is also fantastic as Bass, a character fed up with the injustice and mistreatment, it's a small role that Pitt plays with passion and heart.

'12 Years a Slave' is harrowing, disturbing and relentless exploration of a dark time in human history. Thank you, Steve McQueen, for crafting such a powerful film that does not seek revenge but only too give audiences a perspective on the hardships of the time. One of 2013's finest Cinematic achievements, a must see!