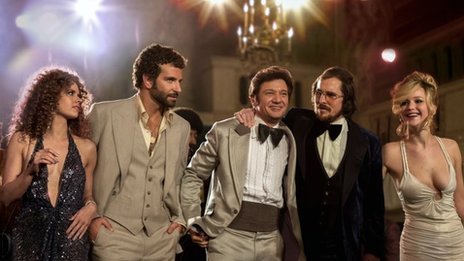 ''Did you ever have to find a way to survive and you knew your choices were bad, *but* you had to survive?''

I ventured outside my room for the first time this month after many hours of movie watching...in order to watch another movie!  I sat down to watch David O Russell's latest release, 'American Hustle', a film kinda based on a true story and featuring a star studded cast.

Christian Bale continues his freakish knack of changing his weight immensely for the role of Irving Rosenfeld, a lifelong hustler who is in a loveless marriage with his eradic and unpredicatable wife, Played by the always incredible Jennifer Lawrence, with whom he has an adopted son. Irving begins hitting his stride as a hustler when he meets his lover Sydney Prosser, the amazing Amy Adams, and the two pull off several big cons, until the paths transpire with an unhinged cop Richie DiMaso, Bradely Cooper, who forces them to skills to work against the mafia and crooked politicians.

I have pretty much liked all of Russell's filmography up to this point and I'm quite a big fan of his. The man does a great job in fleshing out characters and making the either memorable or relatable. So it comes as no surprise that this is the area in which 'American Hustle' strives. All the major characters, and even some minor ones, are really fleshed out and rarely will you come across a character that is one dimensional. I realize that Russell values character over plot which is great, I feel the same way, but it comes as a disservice to the well written characters when they are put into such an unremarkable premise.  I didn't hate the story by any means, It just didn't move or entice me. It was entertaining but I feel like we as the audience were supposed to buy it as this wacky and elaborate hustle story where everything is almost to crazy to believe, it's not that kind of plot. There are some twists and turns but nothing that you'll truly remember. It is entertaining though and the great characters elevate it immensely.

'American Hustle' features a really star studded cast, which features three of my favorite actors. Christian Bale, one of my all time favorite and one of the best performers of his generation, gives yet another amazing performance and physical transformation. Although an excellent performance, this may only be the second time in which Christian Bale does not give the show stealing performance, that honor goes to the female Bill Murray, Miss Jennifer Lawrence. It's almost scary how Lawrence seems to be getting better and better with each film. She is most definitely the most memorable thing about this film, she is crazy and hysterically funny here, such a confident and fearless performance and it's telling when Amy Adams is only the second most beautiful woman on screen. Speaking of Adams, she is her usual amazing self here, essentially playing two roles, A lot of the narrative rested on her shoulders and she gave a powerful showing. I've become a bit of Bradley Cooper fan, the man was fantastic in 'Silver Linings Playbook' and 'The Place Beyond the Pines' and he continues that trend here, great great stuff from him. He played the role of a kind of sleazy and mentally unbalanced cop perfectly. I really can't stand Jeremy Renner, when news about casting of this film was released it came as a major disappointment when Renner's name was among the likes of his talented co-stars, I will give him his due though, he was good here. Even Comedian Louis C.K is awesome in his role. This film also had one of the most effective surprise cameos in recent memory! I won't spoil who it is but it honestly shocked me when he appeared. It was my dream to Christian Bale act beside Mr. Surprise cameo, so it was a great site to see. Great stuff all round.

I don't think 'American Hustle' is as good as Academy voters will have you believe. It will absolutely be over hyped and it will only be a detriment to the film. It's a good film though, well made, compelling characters and  excellent performances. 'American Hustle' may just be my least favorite Russell film, but even at his weakest, Russell is an enthralling artist. ''It's always difficult to keep personal prejudice out of a thing like this. And wherever you run into it, prejudice always obscures the truth. I don't really know what the truth is. I don't suppose anybody will ever really know.''

In ’12 Angry Men’, you won’t find guns, explosions, car chases or extensive action sequences. There are no big action stars that will fire off a witty one liner as they dispense with another enemy, there is no masked killer or a giant a great white shark, but Sidney Lumet’s 1957 courtroom drama may just be the most suspenseful and thrilling motion picture experiences ever devised.

All but 3 of this 93 minute film are set in the almost claustrophobic jury room. Our players are 12 jurors, all from different walks of life and all with varying personalities. The crime is murder, the accused is a young boy who is on trial for his life for the murder of his father. When the men first shuffle into the room, on which coincidently happens to be the hottest day of the year in New York City, we get a sense that all of these men would rather be anywhere else as few of them elaborate on having other plans and cracking jokes. Only a couple of these men reveal their names, but all reveal their character. Juror #1 (Played by Martin Balsam) ask the jurors to politely to sit around the large table in the middle of room, the men proceed to take a guilty or not guilty vote, 11 men vote guilty, 1 does not.

That one man is known as Juror #8 (Played by Henry Fonda), who doesn't pretend to know all the answers, actually the only reason he does not vote guilty is because he ‘’doesn't know’’, he has a reasonable doubt and he may be the most honest man at the table. It’s a truly difficult thing to stand your ground in the face of adversity; this gives an even greater depth to this character. When the men become hostile to him, he does not budge, stating that it’s not easy to raise my hand and send a boy off to die without talking about it first.’’ All he wants to do is talk about it, go over it again, and dissect all of the evidence. The men reluctantly and stubbornly do so, and Juror #8 slowly forces them to think about the monumental decision they have to make.

’12 Angry Men’ is a simple and minimalist film; yet if focuses on array of various themes. Through the men’s arguments, we get insight onto racial prejudices, as several of the men seem to vote guilty simply because the kid is from the slums and different from them. It shows how beneficial doubt can be, if not for one man’s doubt, the kid would have been sent to death. One of the most evident themes though is father and son relationships, not only is the boy being accused of killing his father due to years of abuse, but also Juror #3 who is mainly voting guilty due to the disconnection he has with his own son, and is obviously weary of the kids in modern days ‘’It's these kids - the way they are nowadays. When I was a kid I used to call my father, "Sir". That's right. "Sir". You ever hear a kid call his father that anymore?’’ he proclaims. It’s a testament to the film that, what appears, to be a straight forward story that can weave in so many different outliers.

This is a film that, almost more than any other, proves how instrumental good dialogue is. Simple words and questions convey so many various emotions, as I alluded to into the intro, this film manages to excite and thrill no other. We as the audiences are not sure if this kid is guilty or not, we have to rely on the characters views and perspectives, which forces us to filter out the bias, the thrill comes from watching Juror #8 attempt to stand his ground and the way in which begin to realize. The story by Reginald Rose is so brilliant and complex, and something we can learn about now more than ever.

Sidney Lumet was a terrific filmmaker, and to think this was his debut film is just incredible. His camera placement is marvelous and is able to make this small room seem mammoth at times. The performances from all 12 players are absolutely phenomenal; everyone plays the role to perfection. Henry Fonda is magnificent and Juror #8 has to be one of the greatest heroes of the movies.

I’m not sure if Rose knew whether the kid was guilty or not, and I hope Juror #8 is his narrative voice. In terms of story, it really doesn't matter whether or not the kid was a killer, what we really need to take from this film is not to jump to conclusions and that doubt can be a life saver. Whether you buy into the theories that Fonda is actually the killer and is looking to get the kid off the hook to clear his conscience or maybe that he was actually an angel or something, but any way you look at it. ’12 Angry Man’ is one of the greatest and most effective films ever made.