''I am putting myself to the fullest possible use, which is all I think that any conscious entity can ever hope to do.''

My thoughts about '2001: A Space Odyssey' can almost be summed up by a line from Harmony Korine's 'Spring Breakers' in which James Franco's character proclaims about his luxurious bed that ''it isn't a bed, it's an art piece''. Substitute ‘‘film’’ in for ‘‘bed’’ and you have the most straight forward possible description of Kubrick's space epic. But the film, and it's one of kind creator, are anything but straight forward.

After the discovery of strange monolith buried under the lunar surface, a space team goes on a mission to Jupiter investigate the monolith, with the help of HAL 9000.

There may be no other picture in history that completely represents film as an art form, quite like '2001'. Every single frame of the film seems like an individual piece of art, and the film as a whole would not be out of place playing on an endless loop at any prestigious art museum. In addition to being the most visually arresting cinematic experience available. '2001' is also a triumph in the story telling. Kubrick's use of minimalism and lack of a coherent narrative, instantly make ‘2001’ a unique piece of work, but its scope and execution make it immortal.

Only a filmmaker as ambitious as Kubrick could even attempt to orchestrate a film on the scale of '2001. It's almost a work of a mad genius, beginning a film with a 20+ minute stretch of no dialogue (sans the screaming of apes and growl of leopards) and apes seemingly fighting for territory and discovering an artificial monolith, would have had to be a courageous move for a filmmaker in 1968. One of the infinite things I respect about Kubrick is that he never took his audiences for granted, he didn’t usually waste time on introductions and had the trust in audiences to be prepared for the journey he is about to take them, ‘2001’ is exhibit A when it comes to this. The lack of a grounded narrative here may alienated some viewers who are used to having Directors walk them through films, but if they simply dismiss the film at 15 minutes in and refer to what they have seen as boring and nonsensical, then they are doing themselves the displeasure of missing out on one of cinemas greatest journeys.

Like he did with ‘The Shining’ 12 years later, ‘2001’ sees Kubrick create a labyrinth of mystery and unanswered questions. As his co-writer and author of the source material, Arthur C. Clarke once said of the film that ‘’If you understand 2001: A Space Odyssey completely, we failed’’ going by the way in which audiences have been baffled by and absorbed by interpretations in the decades after its release, the film was an almighty success by Kubrick and Clarke’s criteria. I’m a huge fan of when great films leave themselves open for interpretation, It’s such a great attribute for a film to have and it transcends being used simply for entertainment value, ‘2001’ is a prime example of getting this aspect utterly right. This film that you have the urge to watch over and over again in order to form an opinion of your own. Kubrick being Kubrick most likely has dozens of underlining themes hidden throughout the film that people have yet to tap into.

As I, and everyone else, have already alluded to, ‘2001’ is beautiful. There has been almost an infinite amount of visually beautiful films, the likes of ‘Lawrence of Arabia’, ‘Days of Heaven’ and even Kubrick’s own ‘Barry Lyndon’, but in my opinion, ‘2001’ truly trumps them all as the most awe-inspiring looking film in the history of cinema. So many shots throughout the film are incredibly innovative, scenes like the famous million year spanning transition shot in the films prologue with the ape throwing the bone in the air and it transitioning to a space shuttle, the air hostess using her grip boots to ascend to the roof of the ship, and of course Dave’s trip at the films climax. These three scenes are some of the most iconic you may ever see, and they’re simply 3 of the many throughout the film. The incredible Visual effects (for which Kubrick received his only Oscar) are as incredible as almost anything you will see from Science Fiction films today. Dave’s trip at the end of the film is the definition of mind blowing.

‘2001: A Space Odyssey’ may be one of the most difficult films to critique. The film is almost intimidating in its perfection. There is also no way which someone like I can do this film justice, its cinema at its most artistic and awe-inspiring. A true iconic masterpiece, whose influence is still being felt to this very day. 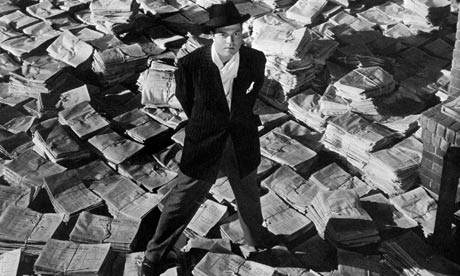 ''You know, Mr. Bernstein, if I hadn't been very rich, I might have been a really great man.''

Being considered to be , possibly, the Greatest Motion Picture ever created has to be as great a curse as it is an honor. For all those that have critically lauded 'Citizen Kane' over the years, there has been many that have been willing to disprove it's status as being ''the best''. This is perfectly understandable as it seems like human nature to buck the system and have an opinion that strays from the general consensus, but in all honesty it is hard to comprehend how anyone can deny the greatness of Orson Welles' unprecedented film debut.

When famed newspaper tycoon, Charles Foster Kane passes away, his final words are revealed to be ''Rosebud''. The Media are in desperation to decipher it's meaning.

It's truly incredible to think that a film of this grand magnitude, was created by a 26 year old in his feature film debut. What Welles achieved with 'Kane' has become the stuff of legend, and efforts have more than earned their acclaim. The film is so ingeniously crafted, so precisely paced and so beautifully put together that it is mind blowing to think that this young man had never worked in the medium before. Welles' non-linear approach to deciphering Kane's mystery makes it all the more enthralling, and the scenes in which the reporter, Mr Thompson, is interviewing those who were integral parts of Kane's life could not have been orchestrated any better. Sure, the film may have still been great without them but with them it makes it all the more great.

One of the most admirable aspects of 'Kane' is it's beautiful, and at times Gothic, look. From the stunning opening shots showing the exterior of Kane's palace, Xanadu, to the final scene the final scene inside Xanadu, Gregg Toland's fantastic Cinematography is just incredible, as is Welles' keen eye for camera placement. It would be foolish to talk about the film's cinematography without mentioning the great deep focus shot in the scene where Thatcher claims Kane from his poverty stricken family, there is shot in which the little boy Kane is in the far distance and can be seen through the window, while Thatcher, Kane's mother and father are conversing in the foreground, the beauty of the scene comes from the fact that everything single thing on screen is in sharp focus, which is awe inspiring considering the distance between the characters in the shot, it's a clever little example of Welles giving a hint to the audience about the film's final reveal, it's also things like this small attention to detail that make this film so great. The use of lighting is also phenomenal and completely enhances every scene it's used in, it was a brilliant move to distort the face of Mr Thompson with shadows for every shot he is in, and I took it to symbolize the ''faceless media''.

'Citizen Kane' is a film that focuses on an array of various themes, most notably corruption and consequences of being wealthy at a young age. While I never I personally never saw Charles Foster Kane as a bad man by any means, it is definitely evident that he is indeed corrupted, but no by any one person but wealth and greed in general. This was never Kane's fault but instead the result of being taken away from a loving family at such a young age. 'Kane' probably one of the greatest examples of a character study there is, the film is such manages to be such a thorough analysis of a character by technically using only flashbacks. 'Kane' succeeds at every sub theme it focuses on as well as having a majorly compelling main storyline. The film is the very definition of an ''emotional roller coaster'' with moments of overwhelming hapiness, inspiration and joy as well as instances of anger, heartache and sadness. 'Kane' conveys that wealth and fame are no substitute for love and compassion.

In addition to being one of cinema's finest filmmakers and screenwriters, Orson Welles was also a gifted performer, as made clear by his immortal performance as Charles Foster Kane. I truly that no other actor, living or dead, could have portrayed the character quite like Welles did, his charisma, his outspokenness and legendary personality fit the character to a tee and results in Welles greatest achievement as an actor. Orson is well supported by his collaborated from The Mercury Theater, including the brilliant Joseph Cotten who plays Jedediah Leland, Kane's best friend, as per usual Cotten gives a wonderful showing. Another notable showing comes from Everett Sloane, playing Mr Bernstein, Kane's manager who continued to be loyal to him, is perhaps the most likeable character on screen.

'Citizen Kane' is truly one of cinema's greatest achievements, the film solidified Welles legacy as one of the greatest filmmakers to grace the medium. I still believe the film is as powerful and effective as ever and is a great time capsule of the time where newspaper was the king of media. 'Kane' is also a phenomenal character study of an impactful man's life and legacy aswell as highlighting the themes of corruption and wealth. Like the famous poster proclaims, ''It's terrific!''