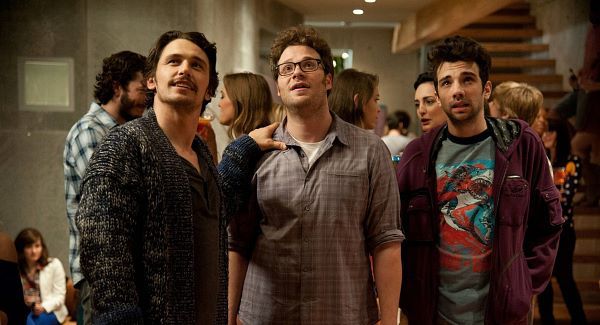 ''Hermione just stole all of our shit. And Jay suggested that we rape her. I think the only reason he did that is because he knows he's about two minutes away from becoming the house bitch himself.''

In what was my second cinematic venture of the day, my friend and I saw 'This is the End'. Truth be told, I probably didn't have  much interest in seeing this film at first but it's overwhelming reception overseas virtually made this a must see for me. I'm very thankful I did as 'This is the End' is not only the best comedy of 2013 but one of the years best films.

After Jay Baruchel comes to Los Angleses to visit Seth Rogen, the two attend a party at James Franco's house, unfortunately this coincides with apocalypse and Rogen, Baruchel & Franco along with Craig Robinson, Jonah Hill & Danny McBride must all find a way to survive.

I dont think I have ever laughed as much in a cinema as I did with 'This is the End'. This film is just flat out hysterical from the very get go. Being a film that is co-directed by Seth Rogen and staring a majority of his buddies, this has all the ingredients of being a giant pretentious mess, unfortunately it doesn't come too that due to all the actors being great sports and allowing themselves to be the butt of the joke on multiple occasions. It was also a masterstroke to have all these stars portray themselves, it gives a great sense of familiarity and makes all the gags even funnier.

'This is the End' features a screenplay written by its co - directors and its just satirical genius, the joke of  actors not being worthy enough to be accepted into heaven is very funny and differs from the popular view that actors are simply more important than the average person. Speaking of genius, the best scene of the film has to be when the guys make the amateur 'Pineapple Express' sequel 'Pineapple Express 2: Blood Red'. The plot being that Danny McBride's charcater from the first film has turned evil and is forcing Rogen and Franco's characters to assassinate Woody Harrelson (played hilariously by Jonah Hill) because he is making a speech that will legalize marijuana, I dont think I have ever laughed at something so hard in the history of my existence.

In addition to being uproariously hilarious, 'This is the End' actually gets surprisingly intense in its final half (albeit hilariously intense). The demon monster actually feels quite threatening to the characters. The proverbial ''shit hitting the fan'' scene at the beginning is really well done as is the scene with the giant chasm engulfing Los Angleses.

Sans James Franco, there really isn't anyone in the cast that I am that big a fan of, but after seeing the film I have grown more respect for damn near everyone on screen. The real life chemistry of the cast  really shines through here and you can tell the actors are having as good a time making the film as the audience is having while watching it. Seth Rogen is great playing too his strengths of the loveable guy, James Franco is as awesome as usual, Danny McBride, Craig Robinson and Jay Baruchel are all very good and Jonah Hill just may be the show stealer as he plays himself as seemingly condescending and smugly kind. All the lead actors do a great job of poking fun at themselves and the film benefits from it greatly. There are also some really good cameos, Michael Cera is probably the most memorable as a drunk asshole, Channing Tatum is also pretty awesome here too. There are also a few cameos that I wasn't a big fan of, like Emma Watson's, I like the scene which revolves around her but whenever she was on screen I thought it fell flat. There were some cameos that should have been played out more i.e Paul Rudd, and some cameos that really didn't add a thing i.e Rhianna. Overall though mostly everyone does a great comedic job, especially the main six.

'This is the End' is a brilliant comedy that features plenty of laughs and a nice satirical touch. The lead characters all do a great job and have no problem in poking fun at themselves. At this point, I definitely believe 'This is the End' is one of the years best films and the comedy to beat.