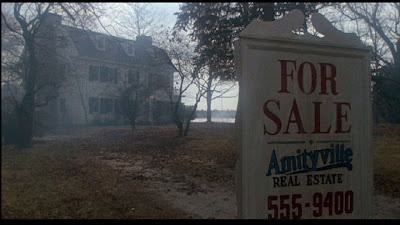 ''Your Honor, it is my intention to prove that Sonny Montelli is a victim of demonic possession - that is, possession by the Devil''

Film #32 of The December Project

'Amityville II: The Possession' is one of the films you watch while you coincidentally curse everything about it inside your head. The film is of course a sequel to the 1979 film 'The Amityville Horror' but takes on a very different formulaic approach to that one, using exorcism as one of its themes. How very original of it...

A heartbreaking portrait of domestic abuse, as a new family moves into that wretched Amityville home, they fight relentlessly amongst each other, but through the power of love and magic they may find happiness in one another, in this uplifting and inspiring tale. Also ghost shit goes down!

I am an Atheist, Not to offend anyone but I cant help but groan at the religious aspect of life, which means I was groaning the entire duration of this films running time. The amount of religious praise and love in this film is incredibly ludicrous, This is a horror film, a form of entertainment, not a fucking church service, this film condescends to its audience with the old 'God is good' theory and fails as a film in every way possible, It may be worse than 'The Reaping' when it comes to heavy handed religion based films. There is also an incest based theme throughout the film which is just horrible and foul minded.

The original 'Amityville Horror' is not a good film by any means, but this make it look like 'Citizen Fucking Kane', This is just a truly unpleasant and excruciatingly irritating experience, I was hoping for a mindless and fun little horror film, While its definitely mindless it is absolutely not fun! I do not believe I got 1 single solitary moment of mere enjoyment in the 102 minute running time.

The performances and characters in this film are absolutely despicable. Whereas James Brolin was the father figure in the original film, A strong and capable guy, the father is played by Burt Young, BURT YOUNG! really ? Sure hes a better actor but come on! The Brolin role is basically moved on to Jack Magner, who looks like an ugly Michael J. Fox, hes horrendous too. James Olson plays the ''heroic'' role of the savior priest in the film and I hated him also, he just came as perverted and creepy. But by far the worst actor on screen was Rutanya Alda, wow was she just horrible, her shocked facial expressions was probably the scariest damn thing about the film. There is also a scene at the beginning where she turns on a tap and gushing out comes blood, she is shocked for a moment then the blood turns to water and she laughs it of, laughs! No THAT'S DEFINITELY CAUSE FOR ALARM!

I apologize to anyone for reading this terribly disjointed,insulting and most likely offensive review, but I just loathed this film. A truly terrible and completely unrewarding experience that I whole heartedly regret watching.