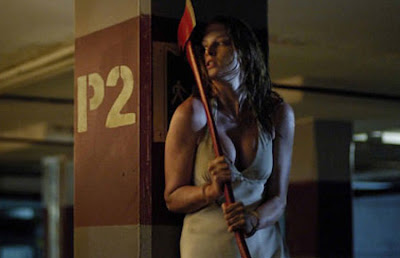 ''Yeah, that way he can go back to his kids and his family, and you can go to your sister's, and I can stay here! In this parking lot! All by myself! 'Cause that's obviously what everybody wants!''

Film #41 of The December Project

Whenever I go to the local video store I usually spend a lot of time in the horror section, I have often seen 'P2' on DVD and always thought it looked incredibly lame thus so I have never bothered with it, but yesterday I saw the full movie was on Youtube, so I decided to watch it today. Also it takes place on Christmas eve, so it the perfect time to watch it! ''A Plan so good, it must be retarded''

Angela is a hardworking business women whom is working late on Christmas Eve before heading out to see her family, but things do not go according to plan as plenty of inconveniences prevent her intentions. She encounters a seemingly friendly parking garage attendant named Thomas, who has sinister intentions for Angela.

'P2' is definitely not as good nor as thrilling a film as it thinks it may be. The film incidentally delves into it lulls in its plot which reveal its thin structure. Their is an avid attempt at portraying a serious psychological study of a truly disturbed and mentally not all there character, and while the performance is good, the direction and writing anything worthwhile or memorable.

The screenplay is co scripted by Alexandre Aja, whose work I can usually enjoy, I liked 'Piranha 3D' and even somewhat enjoyed 'The Hills Have Eyes'. The main problem I have with Aja's work though, is he can never really seem to create enticing protagonist, and 'P2' may be the finest example of that. We are never really given a whole lot of reason to support Angela's, sure we can feel sympathetic of her situation but she just comes off as snide, cold and blatantly unlikeable. While the villain of the film, Thomas, is surprisingly very sympathetic, and just all round more enthralling whenever he is on screen.

'P2' is just never all that thrilling, I was never completely entertained throughout the entire film. The pacing never felt consistent, it would pick up at times before dropping off to a snails pace before continuously doing the same thing all over again. It was tiresome and more annoying than anything and continuously took me out of the film. 'P2' occasionally builds tension relatively well, but it never seems to go anywhere.

The main enjoyment factor of the film is Wes Bentley, whose performance is really a lot of fun and usually complex, he does a very good job and easily upstages his on screen companion. Rachel Nichols leaves a lot to be desired as an actor, she is so unconvincing and so damn irritating that is almost painful to watch her at times.

I don't believe 'P2' is worth your time, at its best its just a sub par thriller, poorly paced with an inconsistent script. I'm glad I never payed to rent this film.