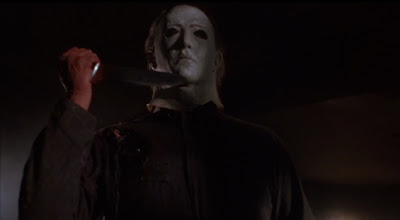 ''I prayed that he would burn in hell. But in my heart, I knew that hell would not have him.''

Film #51 of The December Project

When I first watched through the 'Halloween' series, I remember thinking this fifth installment was the absolute worst of the series. Having just recently watched the pitiful 'Halloween: Curse of Michael Myers', I thought go back and revisit this one, just to see what the definitive worst film in the series was, and I have to say... it was a photo finish.

Taking place a year after the events of the fourth film, Michael Myers has survived the shooting and subsequent fall down a well, while little Jamie is recovering in a children's hospital after severe mental damage.

Its safe to say that Moustapha Akkad jumped the shark with the climax to fourth film, which saw Jamie in a trance like state stab her own stepmother. If they were to follow on with this and have Jamie as the main villain, it could have been a much fresher take on the series, but after the reception the Michaeless 'Season of the Witch' received, I guess Akkad was fearful of loosing money, anyway things go back to normal and Michael has survived yet another shooting and what not, while Jamie is portrayed as still the innocent little girl (despite stabbing her own mother). And once again the previously mighty 'Halloween' has churned out another lame, pointless and boring film.

The film is excruciatingly insufferable. One thing a slasher film should never be is boring, but 'Halloween 5' may the most boring I have ever witnessed. Even the garbage sixth installment, as bad as it was in quality it wasn't really boring, 'Halloween 5' is incredibly poorly paced which got on my nerves immensely. We have had three Michael Myers based films already, we don't need another 45 minutes of setup here! There are so many long scenes of Jamie having nightmares and Donald Pleasence yelling at children, they are just laughably bad and boring as hell. At 97 minutes, the film still feels way too long (It honestly felt like 3 fucking hours), cutting at least 20 minutes would have made the film almost semi watchable (actually who am I kidding).

The direction,writing,cinematography,editing,score and pretty much every aspect of the film is just uninspired, there's no imagination at work, everything is just replicating what Carpenter did with the original, but while Carpenter created the greatest slasher in film history, Director Dominique Othenin-Girard creates arguably the worst.

The cast is all pretty bad. Danielle Harris was a good child actress, she gives another solid performance here, her friend in the film,Bob,though was fucking terrible and just had one of the most irritating faces. Donald Pleasence is all over the place here, I like the guy but his character was getting to become way too much here.

'Halloween 5' is a terrible film, that is so uninspired, so uninteresting, so bland,so lame and so damn boring that it has no redeeming values whatsoever. I'm hoping this will be the very last time I have to see this film.