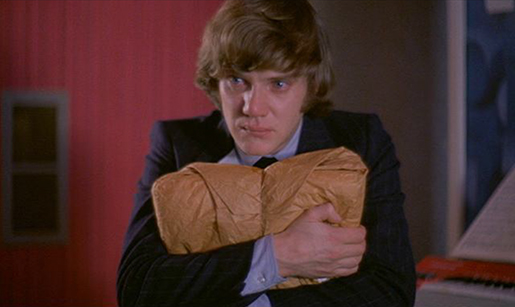 ''Appy-polly-loggies. I had something of a pain in the gulliver so had to sleep. I was not awakened when I gave orders for wakening''

Film #46 of The December Project

‘A Clockwork Orange’ has played a significant part of my life since I first saw it a few years back, after constant viewings and much love it has garnered the second place on my favorite films list and it continues to hold it. Lately During The December Project , it has come to my attention that I have been watching a lot of garbage, as displayed in my My ranking of my last films, which is filled with at least **1/2 stars films, to remedy this I decided to watch my second favorite film, so My idol Stanley Kubrick could save me from the abyss of films like ‘Silent Night’, ‘House of 1000 Corpses’, ‘The Ultimate Gift’ and ‘Dracula: Dead and Loving It’.

In a futuristic Brittan, society is at the mercy of rebellious and violent teenage groups, including The Droogs which features a charismatic and sinister leader named Alex DeLarge. The Droogs spend the nights relaxing at Korova milk bar and partaking in a bit of the old ultra violence. Alex's day as mischievous youth come to end though, as he is turned on by his fellow Droogs and sent to prison. Alex is chosen a special new treatment called the ludovico,which may cure him of such despicable thoughts, but can it possibly work.

Anyone that knows me, is probably aware of my Stanley Kubrick fandom , he is the main reason I am such an avid cinema lover and I adore every single one of his films and idolize the man. My favorite film of his (and just in general) is ‘The Shining’ but ‘Clockwork’ is a very close second. This film is a masterpiece and I can absolutely regard it as one of the greatest motion pictures ever made. The masterful Direction mixed with the fantastic, incredible cinematography and remarkable use of music, truly creates a spectacle to behold.

Kubrick was a perfectionist and a very articulate filmmaker, demanding dozens of retakes if one single detail of a scene is not up to scratch, this makes all of his work comes off as very personal and true ‘directors films’, hes keen eye is prevalent in all his work, and in ‘A Clockwork Orange’ that's no different. Beautifully filmed scenes and long takes consume the screen and you are fully aware that a true master of cinema is behind the camera. The cinematography by John Alcott is truly something amazing and is completely immersive. The fight sequence at the beginning of the film is a lot of fun and choreographed in such a chaotic manner. The scene where Alex teaches his droogs as lesson on the peer is just incredible, filmed in slow motion and being very violent, the scene will sear into your memory.

The film is fantastically written by Kubrick, whom adapts Antony Burgess' novel. The story is so brilliant in the way it subtly satirizes the penal system of Brittan by portraying them as willingly using dastardly and inhumane techniques to 'cure' prisoners. Its definitely a strong comment on the law, but Kubrick does not stop there, as he later shows two of Alex's former accomplices, juvenile delinquents Dim and Georgie, have been able to join the police force. To me personally Kubrick and Burgess seemed to be heavily critical of the way in which the Law is run.

The constant musical motif of Beethoven throughout the film is so beautifully executed, it is used to display the constant changes of Alex's personality and mind set throughout the film. Despite multiple playings, the pieces never outstay their welcome. Wendy Carlos score is also fantastic! so haunting yet so imaginative.

The cast is great, but the film is always centered around one character, Alex DeLarge, the lovably loathsome teen criminal whose main interests are that Ultra violence, Rape and Beethoven. In my opinion, Alex is one of the greatest characters in the history of film, you really should loathe him for his despicable crimes but he is just so damn likeable and charming. Malcolm McDowell's performance is almost brilliant beyond words, what a remarkable performer he is, its such a shame he has relegated to crap like 'Halloween II' and 'Silent Night', but at least his performance here will continue to be immortal. The supporting cast is good too though, especially Patrick Magee as the writer.

I apologize for all my ramblings but I cant help it whenever I am talking about 'A Clockwork Orange' and Stanley Kubrick, but I just can not help it. I will be forever in debt to that man and this film, for opening my eyes to all the feelings cinema can inspire. A truly once in a lifetime experience created by a once in a lifetime filmmaker. One of the greatest films ever created.