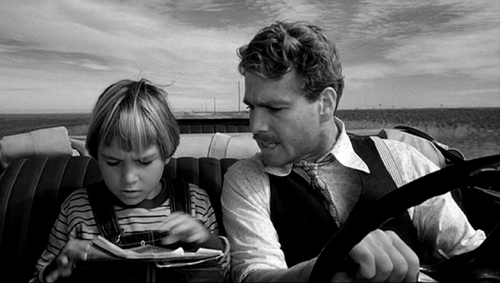 ''I know a woman who looks like a bullfrog but that don't mean she's the damn thing's mother.''

Peter Bogdanovich's 'Paper Moon' lives by the P.T Barnum quote ''There's a sucker born every minute." The film is a brilliant, funny and clever comedic tale of companionship, loss and grifters.

Moses Pray (Ryan O'Neal) is a con man who specializes in selling bibles to widows, while driving through the country on route to St. Josephs Missouri, Moses stops by at a funeral of an old friend, in doing so he is forced to accommodate her daughter Addie (Tatum O'Neal) to Missouri in order to stay with relatives. Addie becomes aware of Moses' business and soon becomes his business partner, the unlikely duo that must survive colorful characters, authority and suckers during the Great Depression.

'Paper Moon' is a widely beloved classic, and in finally getting around to watching the film, its not hard to see why. The film is such an entertaining and beautiful journey about the formation of an unlikely friendship between the money driven grifter and the little girl. The film is beautifully orchestrated by Director Bogdanovich, whom rightfully focuses quite heavily on the dynamic between the two leads, while there are some wacky situations that the two are involved in the film never becomes unrealistic, The writing is terrific, it mixes many elements from different genres such as comedy, Drama, crime and there is even a little suspense.

It was also a fantastic choice for the film to be presented in black in white, The depression was of course a horrid time and color would take away from the anxiety and desperation of the era.

Possibly the films greatest aspect and one of the reasons its succeeds so well is the chemistry between the father and daughter duo Ryan & Tatum O'Neal, Both are absolutely fantastic and work so perfectly together. Ryan O'Neal gives one of the best performances of his career, probably second behind 'Barry Lyndon', and Tatum is great in the role that made here the youngest actress to ever win an Academy Award. Madeline Kahn is as fantastic as she always was in a supporting role, a reminder of how good an actress she was.

There is little I can say that would do 'Paper Moon' any justice, the film is a truly beautiful and constantly entertaining journey, a road movie if you will, a beautifully made film featuring some iconic performances, if you haven't already, see this film.