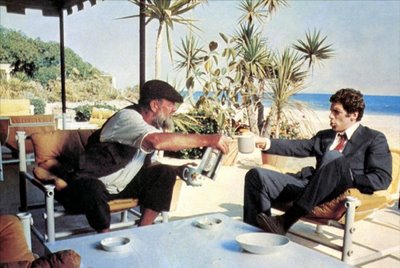 'The Long Goodbye' is a film based on the novel by Raymond Chandler, the man responsible for the novels 'The Big Sleep' and screenplays of  Billy Wilder's 'Double Indemnity' and Alfred Hitchcock's 'Strangers on a Train', here his novel 'The Long Goodbye' is adapted by screenwriter Leigh Brackett and Directed by acclaimed filmmaker Robert Altman. To be honest, I had never even heard of this film before last week when IMDB recommend it to me, reading the plot summary and seeing that it was directed by Robert Altman and featured Elliott Gould (!) in the lead role, I immediately went on eBay and purchased the DVD. My question now is, how in the hell is the film not more well know ?!

Phillip Marlowe (Elliott Gould) is a wisecracking Private detective who lives alone with his demanding cat. One night, Marlowe is visited by a his friend Terry Lennox (Jim Bouton), saying nothing, Lennox asks Marlowe to drive him to Tijuana, Marlowe does so not knowing the consequences of doing so, apparently Lennox killed his wife and then himself. Now, Marlowe is forced to deal with the backlash and mystery of the peculiar events.

First off, I have to say this film is incredibly well made. I have never read the novel but Brackett's screenplay is excellent! such great dialogue and entertaining characters, and Altman direction is as terrific always, he creates such a vibrant yet mysterious atmosphere that never really feels to serious nor to jokey. Also the cinematography here is absolutely glorious, especially the shots of Marlowe's penthouse apartment and the Wade's house on the beach, Just beautiful stuff.

Secondly, this film features possibly one of my favorite film. characters to ever grace the screen, Phillip Marlowe. Wow! what a character, hes like a wiser, less intimidating but equally fearless version of Harry Callahan, and Elliott Gould is just freaking amazing in this film and plays the role to perfection, how he never became a bigger star is a complete mystery to me. The film costars the likes of Nina van Pallandt, Henry Gibson and Mark Rydell, all of whom do a great job. Also,the legendary Sterling Hayden is nothing short of brilliant in his role here.

'The Long Goodbye' is usually compared to Roman Polanski's 'Chinatown', is this a better film than 'Chinatown' ? no, but then again very few films are, but while the two films are vaguely similar I really wouldn't compare them, 'The Long Goodbye' is its own experience and a damn good one at that. If you haven't already, I definitely recommend checking out this film, Its immensely entertaining, incredibly well made and features Elliott Gould in all his glory. A classic homage to film noir.