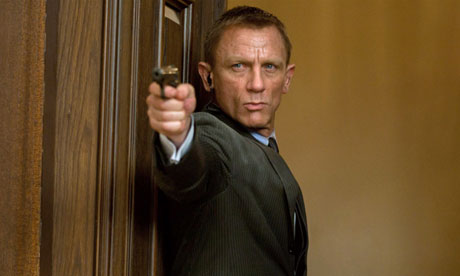 Sévérine: How much do you know about fear?
James Bond: All there is.
Sévérine: Well, not like this... Not like him...

Before I begin this review, I must state I am not a James Bond fan per se, I have seen about four Bond I can think of off the top of my head, two of those are the previous Daniel Craig. After hearing the amazing buzz 'Skyfall' and seeing it was helmed by a great filmmaker in Sam Mendes, I decided to watch the film (A week prior to its Australian release date, thank you Movie2k!).

After MI6 is hacked by an ex agent from M's past known as Silva, Agent 007 must deal with his aging and pain riddled psyche in order to prevent Silva's retribution on M.

'Skyfall' is a distinguished and for the most part intelligent action thriller, something we are sorely lacking these days due to cinemas being riddled with messy mindlessness spewed out by the likes of Michael Bay and Roland Emmerich. 'Skyfall' is what I imagine the Bond films to be, centered around a charismatic and brilliant hero who must prevent the worlds destruction from an equally brilliant villain. The film has the classic Bond formula and is able to adapt it with modern times.

Whoever idea it was to have Academy Award winner Sam Mendes deserves all the congratulations in the world. Mendes is a great filmmaker and after succeeding with films like 'Road to Perdition' & 'Jarhead' which mended both meaning and action terrifically, hes success with a Bond film was never really in doubt. If James Bond was made cool again in 2006, then Sam Mendes just made him fucking Fonzie in 2012.

Also on a side note, this film, both in structure, tone and elements really felt similar to The Dark Knight, I'm not sure if this was intentional or if anyone had the same feeling but it felt present to me.

Daniel Craig returns to play Mr Bond for the third time in 'Skyfall' and let me just say that Craig is man! he oozes coolness and bravado and has really made this role his own, heres to hoping he continues with the role in the future. Javier Bardem plays the Bond villain,the flamboyant and sadistic Silva in this film, after the creation of Anton Chighur in 'No Country For Old Men' and with this performance, I think its fair to say that Bardem makes one hell of a villain!

After fans reveled in the success of 'Casino Royale' and felt the pain of disappointment with 'Quantum of Solace' they can now rest easy in witnessing, from what I understand is one of the best Bond films, while I cant judge it on that level., I will say that 'Skyfall' is a hell of a fun time, and you wont regret the ride.