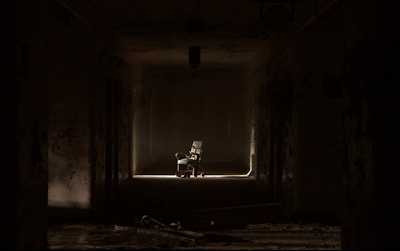 Before Brad Anderson directed Christian Bale's incredible performance in 2004's 'The Machinist' he helmed another psychological thriller, that being 'Session 9'.

An asbestos cleaning crew is hired to clean a desolate mental hospital, all men have their individual problems and they all seem to escalate as the Hospitals past eerie comes back to haunt the men.

Anyone that knows me, is aware that Stanley Kubrick's 'The Shining' is my favorite film of all time, now I was aware that this film somewhat imitated 'The Shining' in certain regards, and that's definitely an understatement. Anderson is obviously influenced by Kubrick's mastery (who isn't ?) and attempts to utilize it to its full extent. For all of 'Session 9's positives I was always thinking back to 'The Shining', admittedly I probably think of 'The Shining' everyday though.

This film has an undeniably creepy atmosphere, which is present from the early stages of the film to its climax, This is due to Anderson's stylish direction, and Uta Briesewitz usually stunning photography, these are the films finest and most redeeming attributes. I was a little less impressed by Anderson's use of frantic editing, I understand why it was employed for this type of film, but it really didn't do anything for me, and instead took me out of parts of the film rather than enthrall me.

All the characters in the film are intentionally unsympathetic, these are all troubled people and Anderson, and to a lesser extent the actors, conveys this well. There aren't any standout performances here and I really wish that some notable and capable actors were hired, but what can we do ?

'Session 9' is far from a great film in my opinion, sure it shows glimpses of Brad Anderson's directing abilities, as he creates a fantastic and haunting atmosphere, at the end of the day though, it felt like 'Session 9' just borrowed ideas and concepts from a truly great film in 'The Shining'.