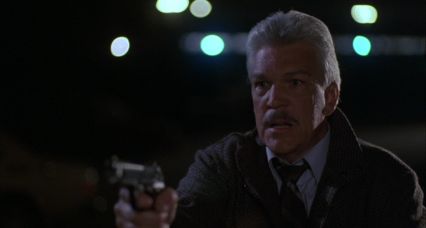 'Maniac Cop' is a mostly forgotten 80's slasher, lost amongst other more well known titles such as 'Friday the 13th', 'My Bloody Valentine' & 'A Nightmare On Elm Street', its unfortunate because 'Maniac Cop' is much more tolerable and entertaining than most slashers of the time. The film follows the pattern of slasher films that make unsuspecting characters its central villain, (i.e a Santa Clause in 'Silent Night,Deadly Night') by having a cop, known primarily for being a safe and protective figure, as a murderous killer.

The film takes place in New York and revolves around a series of crimes committed by a man dressed in a police uniform, with no apparent reason for the killings, police detective Frank McCrae must get to the bottom of the killings.

The film is directed by William Lustig, whom was very familiar with films that have the word ''Maniac'' in the title, having directed the 1980 film 'Maniac' as well as this film and its sequel, here he takes the sleezyness of 'Maniac' and mixes it with a more conventional slasher formula, but the great thing about this film is that it doesn't really fall into the traps and cliches of slasher film as much as other films of the time, sure if you look closely enough they may be there but for me personally I found the characters to be more savvy and aware of the predicaments which is a compliment to the writer Larry Cohen.

The film stars two cult horror actors, Bruce Campbell known for his iconic performances in Sam Rami's legendary 'Evil Dead' trilogy, here Campbell plays Jack Forrest, a man falsely accused of the murders he is good but never gets to be the campy star we know him as, and Tom Atkins, who has quite the horror film resume having co stared in films like John Carpenter's 'The Fog', 'Escape From New York' and the role I will always remember him for as the hero (or villain if you look at it from the point of view of child custody services) of 'Halloween III: the Season of the Witch', Atkins is a lot of fun here playing detective Frank McCrae, its kind of a toned down version of his performance in 'Night of the Creeps' with less one liners but more of a kick ass attitude.

I thoroughly enjoyed 'Maniac Cop' it personifies a fun 80's slasher film, sure it may not be bullet proof but having sat through so many horrible slashers as of late, its refreshing to see an enjoyable film like this, Recommended.