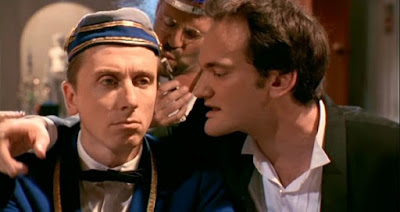 ''Everybody starts out as strangers, Ted. It's where we end up that counts.''

After watching Jim Jarmusch's phenomenal 'Mystery Train' last night, I felt the need to watch another anthology film, being a fan of Robert Rodriguez & Quentin Tarantino and having been meaning to see this for a while, I decided to watch 'Four Rooms' which chronicles around a wacky hotel and its unlucky bellhop Ted,played by Tim Roth.

The film is set in four parts, or four hotel rooms, the first takes place in the Honeymoon Suite and is titled ''The Missing Ingredient'', which is about a coven of witches who are attempting to bring back one of their own but need the help of Ted to do so. The second story takes place in Room 404 and is called ''The Wrong Man'' and shows Ted mistakenly enter a wrong room, facing dire consequences from a psychotic husband and his unfaithful wife. The third segment takes place in Room 309 and is titled ''The Misbehavers'' which features Ted being forced to care for two rambunctious children,The fourth and final segment titled ''The Man from Hollywood'' takes place from a film director's penthouse and see Ted becoming the middle man in a twisted game inspired by 'Alfred Hitchcock Presents'

The film starts of with '''The Missing Ingredient'' segment Directed by Allison Anders, which I absolutely loathed, painfully unfunny and really quite pointless, I wasn't even enjoying Tim Roth's performance at this point.

Next up ''The Wrong Man'' Directed by Alexandre Rockwell, incredibly strange for the sake of being strange and once again painfully unfunny! This film was in danger of being abysmal at this point.

This was the films saving grace, the Robert Rodriguez Directed segment ''The Misbehavers'', a fun,quirky little short that expertly displays Rodriguez's comedic skills as a Director. also features a fun performance by Antonio Banderas, and Roth really comes into his own here.

The films final segment is its best in my opinion, the Tarantino Directed ''The Man from Hollywood'', this segment features the brilliant dialogue and fun characters that Tarantino is renowned for. Performances are great here, especially from Roth and Tarantino, there is also an uncredited performance from Bruce Willis. A great way to end the film.

'Four Rooms' is the very definition of a hit and miss film, the first half of the film is quite brutal while the latter is fun and entertaining. While I was uncertain on him at the start, Tim Roth does hold this film together and without him it would be worse off, but the film is well worth skipping.

Quick rate of the segments: