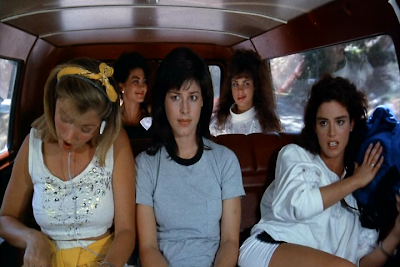 ''Everyone, one of our girls has been murdered, lets all get out of here and not panic, (crowd proceeds to panic)''

'Cheerleader Camp' also known as 'Bloody Pom Poms' is a 1988 slasher , the film is understandably forgotten in slasher film lore and with good reason...

Alison Wentworth (Betsy Russell) is a cheerleader who is suffering from some terrifying nightmares, she accompanies her cheerleader companions to a cheerleader camp (where have I heard that before ?) a strange little camp ran by three supervisors (3!), Two creepy old men and a woman, but there be trouble a foot as an unknown killer roams the camp...and kills!

I don't believe 'Cheerleader Camp' has one solitary idea of its own to bring to the Horror genre, the whole film just feels compiled of rehashed concepts from better films, i.e Alison's nightmares are of course from 'A Nightmare On Elm Street', its laziness like this that make this film so forgettable.

If you take a serious mind into this film you may be institutionalized with serious damage to the brain. This film is mind numbingly ridiculous, I really hope the film was made with this intention because if not I'm very disheartened. The kills are un inventive and lame, and there is a lot red herrings, you know how you can tell they are red herrings ? Because the film fades to RED!!

I like Betsy Russell, and while she is horrible here she is definitely the most tolerable, the rest of cast is absolutely sickening, there is a jock, who looks like a 40 year old man and a fat son of bitch who is one of the dumbest bastards I have ever seen in a slasher film, which is saying a lot!

This also has to been worst camp I have ever seen, worse than Crystal Lake and Sleepaway Camp combined!

I am in a cynical and tired mood so I am sorry for these crazy ramblings all you need to know is that 'Cheerleader Camp' is an unoriginal, irritating and mind numbing film that I would only recommended if your in the mood for pure idiocy.