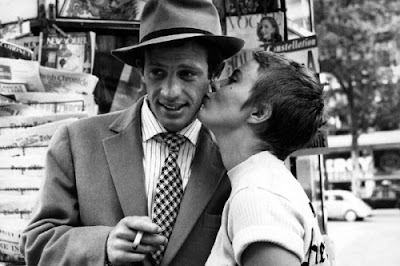 ''There's no need to lie. It's like poker. The truth is best. The others still think you're bluffing, so you win.''

Jean Luc-Godard's 'Breathless' isn't a film that is going to wait for you, from the first frame the film is set at a rapid pace with some frantic editing, this forces the viewer to be on their feet and prepared to keep up, this is not to the films detriment, its quite the opposite its the beauty of the film.

Michel Poiccard is a young man who specializes in false bravado and sarcastic quips. Poiccard is a petty car thief whom is responsible for the murder of a police officer, subject to a city wide search, Poiccard attempts to convince his American girlfriend to escape with him to Rome.

Godard's film is adapted from a story by film legend Francois Truffaut, this film along with the Truffaut directed 'The 400 Blows' both brought international acclaim to French cinema, and are widely considered the country's greatest exports and rightly so, but while Truffaut focuses on a real world issue of the pain of a misguided youth, this film is not as stooped in reality, it almost feels more like a tale of the consequences of such extreme actions.

The film is superbly directed by Godard who utilizes such innovative techniques to create cinematic art, such as not being able to afford a dolly so he simply adapted the Jean-Pierre Melville technique of pushing his cinematographer around in a wheelchair. Godard seem to be a filmmaker that was so in control of his product, he utilizes such wacky tactics almost knowing that he would achieve incredible results, his direction and craftsmanship is the real star of this film in my opinion.

Jean-Paul Belmondo's performance as Michel Poiccard is one of the most iconic elements of this film, and with good reason, the performance demands attention and demands a response, the character really isn't a good person but he is portrayed in such a way that it seems like he has gotten into this business way over his head, thus creating a sense of sympathy. Jean Seberg is also fantastic as the leading lady, portraying the character that symbolizes the statement that love is blind.

I don't believe I enjoyed or was as emotionally invested in this film as I was in 'The 400 Blows' but with that being said I can still fully appreciate and understand the acclaim this film received. Godard's direction is damn near impeccable and inspires some fantastic performances, A true cinema classic.