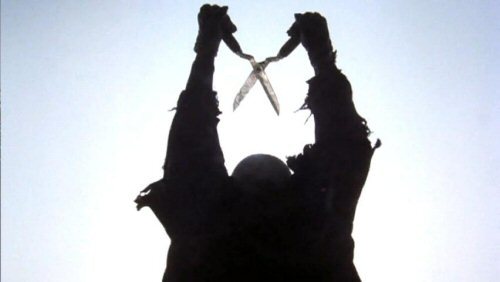 It's 1981, Two Years prior The Horror Genre and pretty much Film in General was turned on its head,This was due a young Director by the name Of John Carpenter who had made a Low budget slasher film that would set the standard for the sub genre for years to come,Yes the movie was the classic "Halloween", The film was made on a shoe string budget and went on to become highest grossing Independent film until "The Blair Witch Project" was released in 1999. Due to the films success,studios jumped on the idea of a slasher film,Where an unknown assailant stalks and murders young teenagers. In 1980,The most famous "Halloween Ripoff" was released,That film was of course "Friday The 13th" The film was low budget like Halloween,but this one took place on the confines of a campground where councellers are being killed of one by one.While shadowing Halloween,Friday The 13th sets its own trend that of a killer let loose in a youth camp.Possibly one of the most famous non-Friday The 13th Youth camp slasher was 1981's "The Burning",Based on The Urban Legend of Cropsy.

The Burning's tale begins in the year 1976, At a camp called Camp Blackfoot,A group of young pissed off teens are looking to get back at their prick of a camp Councillor named Cropsy by pulling off "The Prank To End All Pranks" Lighting a skull on fire and putting it in his barracks,Intending for him to have a heart attack,But things go horribly ary as Cropsy is burned alive and sent to a hospital where he would spend the next six years of his life getting treatment for his severe burns, Cropsy is then acquitted and thus the horror begins as Cropsy arrives not at Camp Blackfoot,but this time at a camp called Stonewater with his trusty pair of garden shears,Which means bad news for everyone in the vicinity of zed camp.

As is the norm for the Slasher film we are introduced to bunch of stereotypical bland teenagers played by mostly unknown stars,But amongst the actors who would never be heard from again is a few who went on to make a name for themselves,Those being Jason Alexander best known for his role as George Costanza on "Seinfield",Also featuring in the cast making her film debut was Academy Award Winner Holly Hunter (The Piano).

The main teenager portrayed in the film though is Alfred played by Henry Winkler lookalike Brian Backer, The strange thing about the character though is that he defies the mold for a typical Slasher movie hero,For One he is not a female,Two he is a Pervert (For which he blames on "Being Picked on" by others around the camp) Based on these facts alone the kids should suffer a Painful death, *SPOILER* But he does not and leaves the film as a hero. Probably the films true heroic figure though is Todd, played by Brain Matthews,He is the typical strong camp Councillor with a heart of gold,Or so it seems,At the films climax It is revealed that he was one of the kids who burned Cropsy alive,Yet like Alfred he leaves the film as a heroic figure. My point is that The Burning goes against the grain by which all other Slashers are measured, The Rules that were acknowledged in the "Scream" series do not apply in this film.Cropsy our villain was stripped of his livelihood and almost killed by our hero, yet the audience is supposed to support a man who was part of what could have been Murder. I believe it is themes such as this is what separates The Burning from other Slashers.

Onto the film-making aspects Of The Burning, The film is Directed at a steady pace For its kind of movie, The argument could be made that it drags towards its climax instead of building the intended suspense,As we get long scenes of Alfred running around the woods.The Music is a decent Horror film score that at times even sounds like the theme to Carpenter's "The Thing" (Which was released a year later) The are some decent scares in the film mixed with interesting and provocative kill sequences, The most infamous of all being "The Raft Massacre" which even by today's standards is still quite disturbing and gruesome,The Special effects are very good because of the fact that legend Tom Savini is involved,Who as always puts his best foot forward. The acting is typical teen in peril Slasher film stuff,With the stand out in my view being Jason Alexander who comes across as a natural so early on in his career.

Overall,The Burning may not have the fame or the notoriety that say The Friday The 13th films have,But in its own right The film is a fun and nostalgic little slasher film that can stand on its own merits. Personally I dont think the film is as good nor entertaining as The original Friday The 13th, But it does come reasonably close. Its filled with some great innovative Kills along with some decent scares. I give "The Burning" 3 Bloody Pairs Of Garden Shears Out Of 5