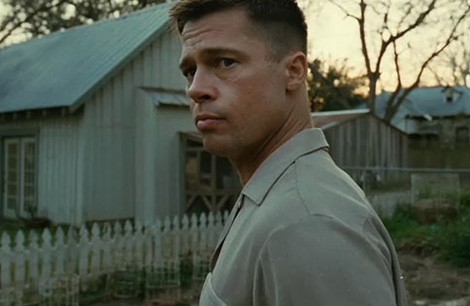 "Your mother's naive. It takes fierce will to get ahead in this world. If you're good, people take advantage of you."

I had been anticipating The Tree Of The Life for well over a year,Its hard to not get excited about a project like this one,Visonary and reclusive Director Terrence Malick exciting enough Brad Pitt and Sean Penn being involved is.Tree Of Life didn’t get a theatrical release where i live so i had to wait a few more months for the DVD until i finally got the chance to see it,I don’t think ive ever been so disappointed, disheartened or dissatisfied like i was 30-40 minutes into this film, The film felt so pretentious with ridiculously long scenes of random footage of space, waterfalls, Dinosaurs and the Lochness Monster it really took me out of what should be a simple story and I even considered turning the film off, Luckily I didn’t as when the film gets into the brunt of its story with the children dealing with the strict 1950’s parenting of Brad Pitt’s character I would consider the film the masterpiece I was expecting but it was ruined for me as the same random footage returned for the last 15 minutes.

Malick brings his usual amazing visuals to the film, while they may be beautiful, breath taking and a spectacle in themself it doesn’t make for good storytelling and its not until almost an hour into the film that Malick begins to tell his story in a conventional way.But when he does begin telling the story i was absolutely enthralled and absolutely loved the film at that point.

The scenes are emotional and beautifully shot with terrific cinematography ,These scenes are brought to life though by powerful performances especially that of Brad Pitt who is absolutely phenomenal in his role as the tough minded father,In 2011 in Pitt has given arguably two of his greatest performances along with his role in “Moneyball” he has to been a front runner for a well earned Oscar.

Im not sure where i stand with this film, On one hand i hated the pretentiousness of the first 30 minutes with some ridiculous theory’s and images being drilled into the audiences brains but on the other hand i loved the middle section of the film especially Pitt’s performance, I guess I’m going to have to say that while it struggled with it ,The Tree Of Life is a great cinematic achievement from one of the business’s most visually remarkable filmmakers.
Tom: 3.5/4
Posted by Tom at 00:48