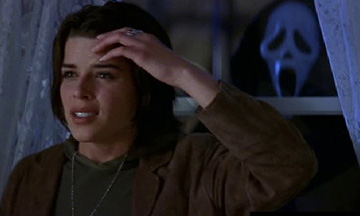 The second sequel to Scream and while Scream 2 seemed to be rushed into production,Scream 3 was released three years later,which should be a good sign,unfortunently Scream is the black duck of the Scream series,and while Wes Craven stays on as director,Kevin Williamson did not return to write the script,Williamson was instrumental in screams success and his hugely missed here,instead we get future "Transformers" writer Ehren Kruger,which says a lot.
Sidney Prescott is living a reclusive life after surviving a second set of murders at Windsor College,but murders start reoccuring on the set of Stab 3,when Dewey and Gale are among the many in danger,Sidney must decide weather to continue her reclusive life or confront "Ghostface" one last time
In what has become a tradition in the Scream series,we get another murder in the opening scene.Williamson's presence is clearly missing here as Kruger gives us the most lackluster opening of the series. The character in focus this time is Cotton Weary,who after achieving his much wanted fame between the second and third movies,is killed here,its unfortunate because Cotton was a really fun character in the second film.He doesn't get sent off in a great way either.
The Scream series has always had a lot of tongue in cheek humor,but Scream 3 multiplies it by 10 and almost becomes a full on Comedy.
The film has a lot less thrills than the first two installments and gives us the blandest characters even more so than the previous film.New cast members Jenny McCartney,Scott Foley,Lance Henriksen are all paper thin here. Parker Posey is a great actress but she isn't given a great role having to be Gales double and sidekick.The films hollywood setting doesnt feel right either compared to the high School environment in the last two.
Overall Scream 3 is a major disappointment.The film substitutes self awareness and clever references for out of place humor.This is definently the low point of the series.