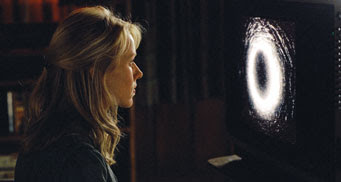 "The Ring" is an American remake of the Japanese horror film "Ringu". I haven't seen the original so I can't compare but what I know is that Gore Verbinski's film is one hell of a scary ride. The film revolves around a young journalist who after the death of the mysterious death of her niece begins to investigate a strange video tape which causes the death of the person who watches it exactly one week after viewing it. I usually hear people reference The Ring as one of the best and scariest horror films of the last decade, I didn't really understand this until a Rewatch. The Ring is truly terrific for it's ability to create a brilliantly Erie atmosphere, it also involves genuinely chilling moments. The film begins without opening credits but a terrific scene which really sets the pace, in some ways it reminded me of the famous opening scene from "Scream" for it's ability to start the film with a bang. Naomi Watts us a great actress and is given a good role here as the strong minded, protective and almost fearless heroin. The film has somewhat of an ambiguous ending which I think is great and gives the characters and sense of doom and will stay in the audience head after watching,The actual "Video Tape"features random images and videos and is truly bone chilling. Overall The Ring is a great film. Horror audiences should appericiate Verbinski's unsettiling chiller