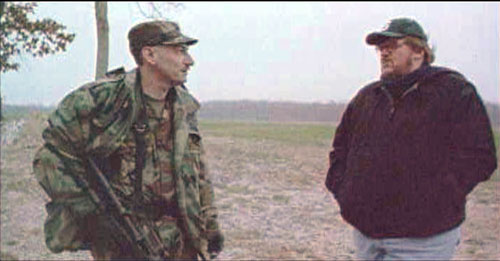 Michael Moores Academy Award winning documentary is in my opinion a thought provoking masterpiece, The film deals with Americas obsession with gun violence.The film has it's moments of humor along with it's touching and emotional moments, with this documentary Moore asks the question "Is America a nation of gun nuts? Or just nuts?" Moore gives his full dedication to the subject and explores it really well, the film deals with the tragedy that was "Columbine Massacre" and also the tragic grade school shooting in Moores home town of Flint Michigan. During the film Moore Has discussions with various people from all over Canada and the USA and also interviews celebrities such as Matt Stone(Creator of South Park), Marilyn Manson and Academy Award winning legendary actor and president of the NRA Charlton Heston . I found the Heston interview at the end of the film extremely confronting and I may not see Heston in the same light as I did before this film. Overall this is a terrific film that should be checked out if you have any intrests in the subject manner or a fan Michael Moores or anyone film fan or member of the public for the fact. High Recommend.